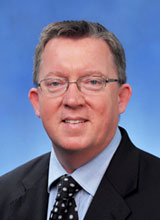 Commissioner Justice, the Chairman of the Pinellas County Board of County Commissioners will speak to the Business and Professional Women of St. Petersburg – Pinellas organization on Thursday, September 15th. Commissioner Justice is a long-time supporter of the BPW and most recently joined them for Unhappy Hour in April and presented the organization with a proclamation from the BCC in support of Equal Pay for women.  He plans to provide an update on County issues including county organization and economic development, as well as County partnerships with municipalities.

Commissioner Charlie Justice serves as the Chairman of the Pinellas County Commission. He was elected to the County-wide Commission seat in 2012 after a decade of service in the Florida House of Representatives and the Florida Senate.

Commissioner Justice is a Pinellas native, having grown up in west St. Pete and graduating from St.
Petersburg College and the University of South Florida St. Petersburg.

Commissioner Justice this year celebrated his 20 th wedding anniversary with his wife Kathleen and they are the proud parents of two daughters. The Justice family resides in west St. Pete.

Employment Prior to Election

A Pinellas native, Commissioner Justice lives in St. Petersburg with his wife and two daughters