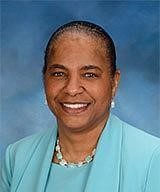 In recognition of Veterans Day (November 11), Shelina Frey, USAA Military Affairs Representative, will address the challenges faced by female veterans upon separating from the military and entering the civilian sector.

Shelina joined the USAA Military Affairs Team in February 2018 after retiring from the U.S. Air Force as a Command Chief Master Sergeant with 34 years of service. USAA’s Military Affairs team is composed of retired officers and senior noncommissioned officers who dedicate themselves as advocates for those who are currently serving in the military, all those who have honorably served in the past and their families. The team of professionals is responsible for creating and sustaining relationships between USAA, its strategic partners, military leaders and military-related organizations so that USAA can engage, serve and advocate for the military community.