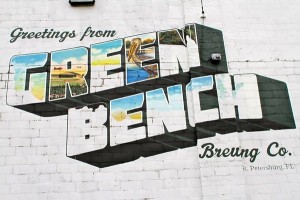 Congratulations are in order for St. Pete’s very own Green Bench Brewing Co., for being named one of the Top 10 Breweries nationwide at the recent 2014 U.S. Open Beer Championship! We’re partial to this craft microbrewery since co-owner Steven Duffy is the son of BPW/SPP member Becky Duffy. We’re also grateful to Steven and his crew for graciously hosting one of our membership socials this past spring. In addition to their top 10 status, they also won two golds and bronze in the flavor categories. Try some of the award winning beers and sample some of the other tasty brews, at Green Bench Brewing Co., located at 1133 Baum Avenue in St. Petersburg’s Edge District.