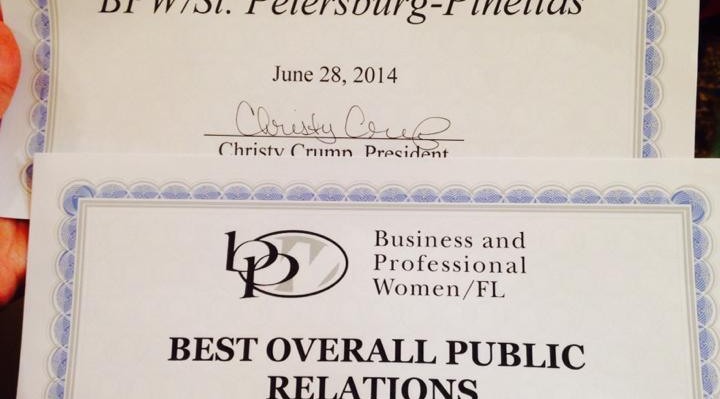 BPW/St. Petersburg-Pinellas Named LO of the Year, Wins Most Awards at State Conference

Of the 17 statewide affiliates, BPW/St. Petersburg‐Pinellas garnered the most awards and top honor at the 94th annual state conference held June 27-29, 2014, in Orlando, Fla. The eight awards that recognized BPW/St. Petersburg‐Pinellas for its achievements in public relations, educational and legislative programming, and membership growth, also earned the chapter the coveted distinction of Local Organization of the Year for the second consecutive year.

“We are honored that our yearlong efforts in programming, community outreach, public relations and membership have been acknowledged by our peers across the state,” said Gretta Paige Bellas, paralegal for Kira Doyle Law and immediate Past President of BPW/St. Petersburg‐ Pinellas for 2013-2014. “Receiving recognition as BPW/Florida’s Local Organization of the Year for the second year in a row underlines our chapter’s commitment to achieving equity for all women in the workplace.”