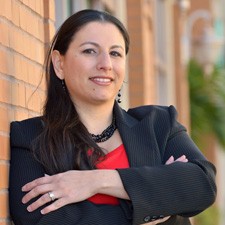 GUEST SPEAKER for July 21. Dora Komninos – Running for Pinellas County Judge, Group 8. She has been active on the Pinellas County Domestic Violence Task Force. She also sits on the Fatality Review team of the Task Force, and is a member of the Barney Masterson Inn of Court and Pinellas County Chapter of the Florida Association of Women Lawyer’s.

Dora Komninos is a first-generation Greek-American born in Somerville, New Jersey before moving to Pinellas County, Florida as an infant. Growing up in a Greek family, Dora learned the value of hard work at an early age by working in her late father’s many restaurants in Pinellas County. Dora continued working while going to high school at Dixie Hollins High School where she was also active in sports. Upon graduating from high school in 1994, Dora continued her education by attending St. Petersburg College and obtained her Associate in Arts (A.A.) degree in 1996. Dora then attended the University of South Florida and earned her Bachelor’s Degree in Business Administration (B.B.A.) in 1998.

Upon completion of her undergraduate studies, Dora enrolled in law school at St. Thomas University School of Law in Miami Gardens, Florida. While in law school, Dora was active as a Senior Articles Editor for the Law Schools Law Review, as well as being the President of the Florida Association of Women Lawyer’s school chapter. Dora also was a Research Assistant to her family law and contracts professor, Beverly Horsburgh, while also interning for a local private defense attorney in Miami. During her last year of law school, Dora participated in the school’s clinic program as a certified legal intern working for the Legal Aid Society of Miami where she represented victims of domestic violence in court in obtaining final injunctions against their abusers.
In 2001, Dora earned her Juris Doctor in Law (J.D.). After law school, Dora enrolled at the State University of New York at Buffalo where she earned a Masters in Law (L.L.M.) in Criminal Law in 2002. Upon graduation, Dora immediately obtained a job as a prosecutor with the Office of the State Attorney in Pinellas County. To this day, Dora is the only prosecutor in Pinellas County who has earned this specialized degree in Criminal Law.

At the State Attorney’s Office, Dora was immediately assigned to the Domestic Violence Unit, the unit which she has actively supervised since 2007. In her role as a supervisor, Dora manages four (4) newly licensed attorneys in the prosecution of domestic violence cases from arrest through trial to include advising them on filing decisions, bond hearings, motions, trial strategy and sentencing recommendations.

In her position as Lead Trial Attorney, Dora has been the sole prosecutor for Indirect Criminal Contempt cases arising out of civil cases where the Office of the State Attorney has been appointed to prosecute contemptuous conduct such as failure to pay alimony or child support and/or violating other court orders.
Dora’s responsibilities also include providing in-service training to law enforcement and 911 communication operators on domestic violence. Dora also trains and lectures on Domestic Violence to other community organizations and agencies and has lectured at Stetson College of Law, St. Petersburg College, the Pinellas County Sheriff’s Youth Ranch, St. Anthony’s Hospital and was even invited to be a guest speaker in the U.S. Virgin Islands in 2008 presenting to members of the U.S. Attorney’s Office, local law enforcement and victim advocates. Dora has sat on panel discussions on issues arising in the criminal justice system involving domestic violence cases with then Chief Judge Thomas McGrady and former Clearwater Chief of Police (now St. Petersburg Chief of Police) Anthony Holloway.

Dora has also always been active in her community volunteering her time and service to many organizations. Dora has been active in the Pinellas County Domestic Violence Task Force for over ten (10) years, and is currently the Chairperson of that organization. Dora also sits on the Fatality Review team, a subcommittee of the Task Force that reviews intimate partner homicides and near-deaths for patterns and trends in domestic violence to help prevent future violence. Dora is also a member of the Barney Masterson Inn of Court and the Pinellas County Chapter of the Florida Association of Women Lawyer’s; both legal organizations that help improve the quality of the legal profession while also volunteering in the community they serve. Dora is also a member of the St Petersburg and Clearwater Bar Associations and Seminole Lake Rotary Club.

In her personal life, Dora has been a member of her church, St. Stefanos Greek Orthodox Church in St. Petersburg for over thirty-five (35) years. Dora is currently the President of the Parish Council for St. Stefanos. In 2006, Dora met the love of her life, Spiro Komninos, a practicing business, real estate and probate lawyer, through a mutual friend at a Greek Festival. In 2008, Dora and Spiro married and in 2012, Dora and Spiro proudly welcomed a beautiful, precious and precocious daughter into their lives.