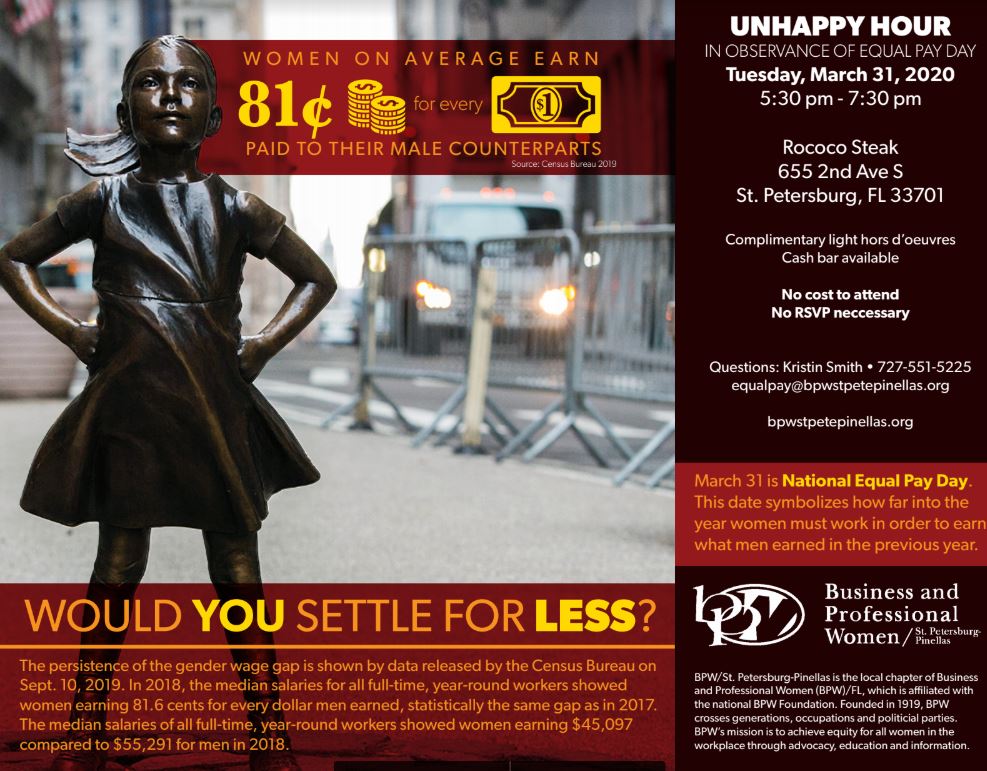 WHAT:  To recognize National Equal Pay Day and to raise awareness of pay equity and wage discrimination, Business and Professional Women (BPW)/St. Petersburg-Pinellas will hold its 17th annual “Unhappy Hour” on Tuesday March 31, the symbolic day that the average woman in the United States finally earns the same amount of pay that her male counterpart earned in the previous calendar year. The average woman makes just 82 cents for every dollar a man is paid, reflecting a gap that results in hundreds of thousands of dollars in lost wages over the course of a career.

COST:  The public is invited to attend this free event. No RSVP is necessary. Light appetizers and a cash bar will be available.

BPW/St. Petersburg-Pinellas is the local chapter of BPW/Florida, which is affiliated with the national BPW Foundation. Founded in 1919 at the national and state levels, and in 1966 at the local level, BPW crosses generations, occupations and political parties. BPW’s mission is to achieve equity for all women in the workplace through advocacy, education and information. General membership meetings are held on the first and third Thursdays of each month at 400 Beach Seafood and Tap House in Downtown St. Petersburg.

Each year, we hold an “Unhappy Hour” to recognize National Equal Pay Day and to raise awareness of pay equity and wage discrimination. 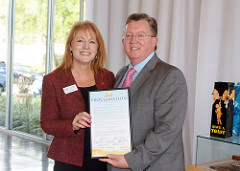 Approximately 70 people attended this year’s Unhappy Hour, including students from the University of South Florida Womens’ Empowerment Club. Part of our event’s mission is to make younger women aware of the ongoing relevance of BPW’s platform issues, particularly pay equity.

BPW/St. Petersburg-Pinellas was presented with a proclamation from the Pinellas County Board of County Commissioners, declaring that April 12th was officially “Equal Pay Day” in Pinellas County, and the proclamation was read to the assembled guests by Pinellas County Board of County Commissioners Chairman Charlie Justice, who also pledged the county’s full commitment to working towards equal pay for women. A second proclamation came from the city of St. Petersburg, and was presented by Sally Everett, the mayor’s Director of Legislative and Intergovernmental Affairs, who spoke of the city’s commitment to partnering with organizations like BPW to make economic empowerment for women and their families a priority in St. Petersburg.